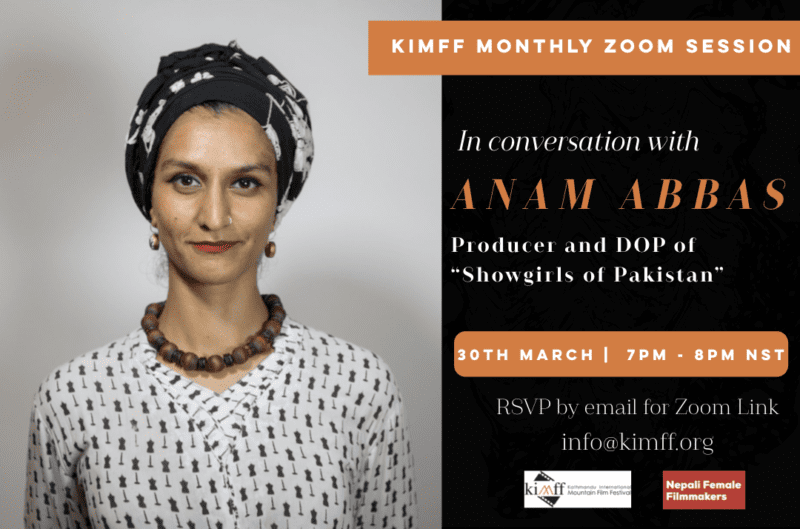 Join us as we speak with Anam Abbas, the winner of the Best Pitch Award at the 2016 Hotdocs Forum,
for her first feature, “Showgirls of Pakistan”, on the occasion of Women’s History Month.
We will delve into Anam’s filmmaking journey, the challenges she faced and the lessons learnt from her
experiences. The session will also address women’s inclusivity and present scenarios in the Asian film
community. The floor will be open for your QnAs.

Anam Abbas is a Pakistan based Pakistani/Canadian filmmaker. She runs Other Memory Media and is one of the founding members of the Documentary Association of Pakistan (DAP). As a producer and DOP, her first feature, “Showgirls of Pakistan”, which had won the Best Pitch Award at the 2016 Hotdocs Forum, premiered in competition at IDFA 2020 and was released globally by VICE in Feb 2021.
Her latest fiction short, “Saya”, co-directed with Fawzia Mirza, was selected to play in competition at the Chicago International Film Festival in 2019. Anam’s first feature documentary as a director, “This Stained Dawn”, supported by the Canada Arts Council in 2020, is currently in post-production. The film follows a group of feminist activists who organises women’s marches in Pakistan. Anam herself was an organiser of these “Aurat march” in Karachi (2018) and Islamabad (2019).
Anam has participated in the 2017 Locarno Film Festival’s Open Doors Hub, 2018 Berlinale Talents, 2019 Film Independent Global Media Makers and 2020 Berlinale Talents Project Market. She is one of the 2020 Cannes Producer’s Network Alumni and the 2020 Telefilm Talents to Watch grantee for Hamza Bangash directed art-house horror “Mariam”, scheduled to release in 2023.